Over the past four years, I’ve become pretty good friends with the band Wayland. They’re named after Phill’s hometown of Wayland, Michigan. They’re a hard-working band, great people, and their music is fantastic.

Whenever I have the chance to go see their set, and hang out, I will always do it. Even, like December 13th, when the snow is coming down really hard, and most people stay home. It’s was pretty crazy, with at least five inches coming down, and some fog. Not the most fun thing you want to drive in.

I texted with the guys, and they let m come to soundcheck and hang out, which is always great, as I get to look at the toys. I’m a nerd when it comes to music gear, and live shows, so I will always check out the tech, from small club shows to large arena shows. It’s my thing. And the Wayland guys have some really nice guitars.

After soundcheck, we spent some time checking out their new tour bus, which is great! It’s been fantastic seeing these guys grow over these past four years, from the small shuttle bus they had, to Walter White, the larger commercial people-hauler, to their first ever full-on tour bus, thanks to Boneyard’s Bloody Blend. These guys have been working hard ever since I’ve known them, and it’s great to see some things finally going their way, and some solid growth. They deserve it.

After the bus visit, the guys were going to catch up on some stuff, and get ready for the show, so I had some time to eat dinner. Mitch joined me at the casino buffet, and we had a good chat, and caught up on some of the things going on with our lives. Mitch is such an awesome human being. An inspirational person, and always such a good friend.

Then, it was show time! The guys hit the stage with “Ghost”, then their cover of Bob Seger’s “Fire Down Below”, both solid rockers. They played several songs from their new album Rinse & Repeat, which is an album you should own if you love rock. Great songs, catchy hooks, solid players. Go get it. Mitch even sent out a song for me, “That’s Life”, as he knows I’ve had a rough year. 2017 hasn’t been the best for me, but it’s great to have amazing friends around me. Thanks Mitch.

After the show, more time in the tour bus, with everyone having drinks and laughter. The guys are always fun, and sharing with their friends, so it’s a great hang. Eventually, things had to end, as they had to hit the road to head to Mitch’s hometown for an early appearance the next morning. It was the first time Mitch got to appear at one of the schools he went to, and perform for the kids, so another special day.

Enjoy the videos, and photos, and if they’re coming through your town, make sure you go see these guys. They’re always amazing live! 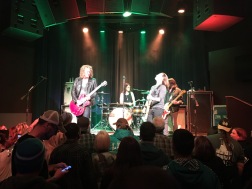 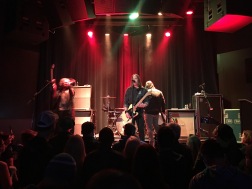 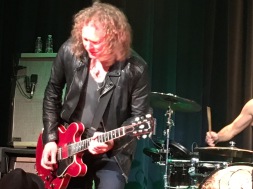